…the pulsating heart of the Alps.
After work, a quick round on your mountain bike up to alpine huts. Before the sun sets, taking a deep breath and then refreshing yourself by diving into one in one of the natural lakes in the surroundings of Innsbruck. One minute you hear cow bells and the next you find yourself sitting in one of the street cafes in the medieval old town of Innsbruck and meet friends. Down in the valley, a vibrant shopping and university city and up in the mountains – solitude at 2,000 meters of altitude. That’s what we call quality of life!

On June 2, 1999, the new Leokino was opened. Innsbruck’s cinema culture should receive an additional site for film outside the mainstream. In order to meet the standards of today in terms of equipment and technology, great efforts were made. The original auditorium was rebuilt in such a way that a second room could arise. So the Leokino now has a hall with 202 and one with 83 seats and a spacious foyer, a communication space, and an office space.

The Leokino serves the film-cultural expansion of the city of Innsbruck and is a provisional culmination of the film culture concept of the Cinematograph team. Construction was made possible with the financial support of the public sector. 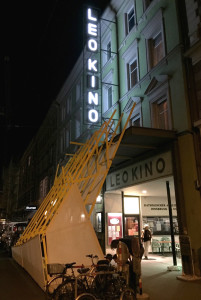