Why are nature experiences fascinating us? Why does the experience of nature get under our skin and move us?
Nature is the basis of our life, and deep within us we all have a relation to nature and landscape. The rationale behind this may be quite divers, emotions however are associated with archaic feelings. Not least because of this, outdoor experiences and activities out in the open are booming.
On the occasion of the 10th Innsbruck Nature Film Days we aim to provide room for this emotional level and show how magical, charming yet dunning and threatening nature experiences can affect our feeling world. The challenge of the cinematic approach is to show films about nature experiences that most of us will rarely ever have themselves.
Suiting the occasion, we have invited special guest and provide a colorful potpourri of films and documentations.
Felix Mitterer will open the Nature Film Days on Tuesday, October 18th. In “Piefkesaga”, Mitterer created a lasting memorial reminding us of the sale of nature while having little appreciation for it. He warned of developments that have become reality by now. In the meantime we know that his futuristic and surreal visions in Part 4 of the “Piefkesaga” have been fulfilled.
The opening film is Yann Arthus Bertrand’s cinematic masterpiece “Home”. Spectacular areal imagery from tropical rain forests and the Arctic Sea to the center of Tokio and Lagos will amaze the audience and make them marvel at the beautiful landscapes. This is followed by imagery about unbounded exploitation and destruction of these natural resources demonstrating the vulnerability of our life-basis and the urge for a collective environmentalism. “Home” is a film that enchants and concerns us at the same time.
On Wednesday, October 19th, our special guest is “wolf woman” Gudrun Pflüger. In the documentation “Die Suche nach den Küstenwölfen” she acts together with a Canadian wolf pack and conveys affinity to nature. Her commitment for wildlife, which often comes into conflict with civilization and generally loses in the end, is unparalleled and of great concern to her.
In two more documentations, landscape from Central Europe take center stage: “Das Geheimnis der Magerwiesen” and “Böhmen – Land der Hundert Teiche”.
The evening on Wednesday is closed with Sean Penn’s internationally award-winning masterpiece “Into The Wild”.
Thursday, October 20th, focuses on Japan, not primarily on the earthquake disaster and its devastating impact but rather on its fascinating sites of natural beauty in the documentation “Wildes Japan” on one hand and “Beetlequeen Conquers Tokio” on the other hand. The latter describes the fascination of Japanese for insects that may seem odd to Europeans.
Our special guest Clemens Lindner, a Tyrolean writer who is familiar with Japan, will read extracts from his work and talk about his years in Japan and how it felt when he had to leave this country because of a nuclear disaster.
The award-winning film “Nenette” takes us to the zoo of Paris and the female orangutan Nenette. The director skillfully turns around “seeing” and “to be seen”. Afterwards, Charlotte Gainsbourg and a huge fig tree are the main actors in “The Tree”, which also caused international furore. This film shows the archaic, magic, threatening and protecting power of Australian nature in an impressive way.
On Friday, October 21st, we first explore the wilderness of Canada together with pupils in Dresden and young Gwichtins. We then dive into the magical aquatic ecosystem with Michael Schlamberger’s excellent film about the Sambesi followed by Florian Guthknecht’s film “Die Schöne und der Hai”.
The cinematic highlight is Luc Besson’s “Rausch der Tiefe” starring Jean Reno in 70 mm, which will close the 10th Innsbrucker Nature Film Days.
This year we again provide a program tailored to the need of teachers, children and young people on three mornings (Ocober 19th – 21st), dealing with the life of Gwitchins in Canadian nature and thereby giving inside into another culture. 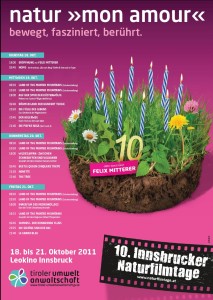