„the Earth gives – the Earth takes.“… about handling resources

This year´s Innsbruck Nature Film Festival is about handling the resources of our planet. At the opening of the event on the 15.10 Reinhard Bigeri will read from his novel about an avalanche disaster.
The topic of this year´s Innsbruck Nature Film Festival „the Earth gives- the Earth takes“ is representative for the relationship between people and Planet. On the one hand it gives us the basis of existence, by providing living space and resources, on the other hand it restrains people by events that can quickly become a catastrophe.
From sneaking resource consumption, for example due to opening up ski resorts, to technically transformed art landscape the films deal with a current lack of understanding handling our nature and our planet.
Meanwhile natural disasters remind us all too often, that humans are not able to dominate nature. Thus dealing with nature often causes direct impacts, which induce immense damage and victims. In cooperation with Wagner´s bookstore it was possible to win Reinhold Bilgeri for the opening evening. Moreover, the folklorist Hans Haid will give a presentation on the 16.10 and the catastrophe researcher Josef Nussbaumer on the 18.10, they will be available for discussion.
Multiple award-winning films like “Up the Yangtze” about the three gorges-dam in China, and “Manufactured Landscapes”, which shows the unbelievable wave of industrialization in China are part of the program as well as the silent movie about “the heritage of the mountain people” or “the avalanche trench”, two awarded films from the Alpine region.
Within the framework of this year´s Innsbruck Nature Film Festival this ambivalent relationship between planet earth and people will be illustrated. Documentations, feature films, Discussions and children´s program shall make us sensitive and thoughtful about how the natural resources are being handled and could be handled. Due to this event, supported by the Alpine Convention, sustainability shall no longer remain a buzzword, but is to become a social guiding theme.
A book table of Wagners bookstore and the possibility to let the books sign by the author will around the Innsbruck Nature Film Festival. 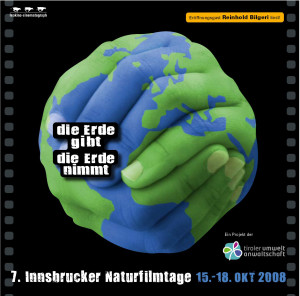