For the 6. Innsbruck Nature Film Festival´s opening Christoph Ransmayr will read from his book “the terrors of ice and darkness”. From 16 to 19 October 2007 global warming, glacial melting and not least the International Polar Year will be topic of this years´ event in Innsbruck Leokino. From the Tyrolean glaciers to the poles everything will revolve around ice and it´s phenomena’s.
This year´s Innsbruck Nature Film Festival will build a bridge to literature with a minor sensation: in line with the topic the Austrian author Christoph Ransmayer, who is rarely appearing in public and has been multiply awarded, will read from his book about the Payer- Weyprecht Expedition to Franz Josef Land. Cinematic rarities like the films “South” and “Nanook the Inuit” make the Innsbruck Nature Film Festival even more impressive.
Documentation and feature films about ice and glaciers will abduct the visitors in a world, which might soon no longer exist. As well in the Alps as at the North and South Poles massive changes become noticeable. In breathtaking pictures the Innsbruck Nature Film Festival enables us to experience regions and phenomena´s, that one rarely has the opportunity to see.
The film “South” was produced under extreme conditions by the expedition leader Shakleton and is the first documentary film ever. The entire team escaped from death at the South Pole by a hairs breadth. The precious film material was provided to the Innsbruck Nature Film Festival by the British Film Institute. Just as stirring is the film “Nanook the Inuit”, that was made in 1922 about the Inuit´s life and that´s aesthetic appeal and cinematic language is still current.
The expedition leader Christoph Höbenreich, who will present his new book “Expedition Franz Josef Land” at the festival, will report about his experiences during the internationally noted Peyer-Weyprecht-Memorial-Expedition.
The formation of our living space we owe to a large extent the ice. In tens of thousands years valleys were ground out by the ice, mountain tops were rounded, terraces accumulated. The melting of the glaciers as the disappearance of the Poles are a cause for concern. Ice is melting, Mountains crumble, animals and plants disappear. It´s not the question of guilt, that is to be discussed in the Nature film Festival, but the changes, caused by global warming. 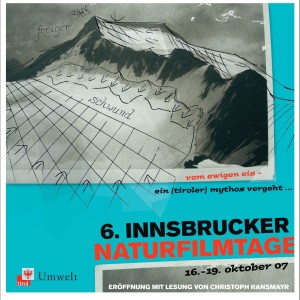