Expeditions to unknown peoples, foreign landscapes, exploring new animals and plants, some inquiring minds are still able to inspire us. But besides this scientific curiosity, today it is often a matter of human rights and the conservation of rainforests. One of these recording explorers was Bruno Manser, lost since 2000 in the rainforests of Borneo. The opening film Laki Penan gives us an understanding of his dream in the jungle of Borneo.

Rüdiger Nehberg is known to many as discoverer, survival expert, book author and above all as environmentalist and human rights activist. Due to spectacular actions within the last decades he attracted attention, curiosity, admiration and head-shaking. Thus he succeeded in his own way to open the eyes of the public to the exploitation and destruction of the rainforests as well as the fatal results of the gold rush in the Amazonas for the Yanomami. Furthermore he successfully persuaded people to campaign for their rights and the conservation of their living environments. Representing explorers and researchers Rüdiger Nehberg will give the opening speech.

Multiple award-winning films by the known director and nature filmmaker Florian Guthknecht, who will be guest in the Leokino on Wednesday, 21. October, like “Jellyfish- dangerous beauties” and “Lord Howe Island” are on the agenda as well as cinematic highlights like Werner Herzogs “Fitzcarraldo” and the final film “The woman in the Dunes” by Hiroshi Teshigahara. An attractive school program completes the range. 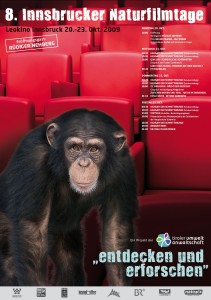