…about the diversity of life.

From October 19th – 22nd 2010, diversity will rule Innsbruck’s Leokino. Diversity of species and diversity of cinematography. On the occasion of the International Year of Biodiversity, the principle of life – diversity as success strategy for nature – will be the main focus of the Innsbruck Nature Film Days. At the opening evening, special guest Toni Innauer will talk about to his approach to diversity of life.
Without diversity in evolution, man would not have evolved. As such, human being is a product of diversity. On the other hand, humans have contributed to enhance the diversity of natural landscapes, for example they have created mountain meadows. The unique flowerage of the meadows would not have evolved naturally. Biodiversity is a topic incorporating human beings, they play an important part in biodiversity. Sadly, they also play an important part in the prevailing loss of biodiversity.
Diversity is the special focus of this year’s Innsbruck Nature Film Days and does not only refer to diversity of life, but also to diversity of cinematography, amongst others we offer two movie premieres: “Jane’s story” and “Bal”.
At the opening, on October 19th, special guest Toni Innauer, former top athlete, Olympic champion, top coach, philosopher of sports, author and enthusiastic fly fisherman, will talk about his viewpoint on the “diversity of life”.
On Wednesday, October 20th, at the premiere of “Jane’s Story”, featuring the world’s foremost expert on chimpanzees and engaged conservationist Jane Goodall, Walter Inmann, head of the Jane Goodall Institute Austria, will talk about this extraordinary woman and researcher as well as about the film-making process.
Internationally recognized movies such as Jan Haft’s “Mythos Wald”, the French American “Sweetgrass” and Nicolas Vanier’s “Der letzte Trapper” provide insights to diversity, often impress with solitude and silence, and above all are magnificent pieces capturing vibes, seasons and emotions.
A film historic piece of jewelry, “Die Heuzieher von Schmirn” of the year 1959 is another delicacy the Innsbruck Nature Film Days are featuring. It deals with the sudorific cultivation of steep mountain meadows at that time.
An attractive school program about the life of beavers will round off the program. 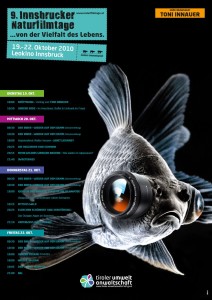